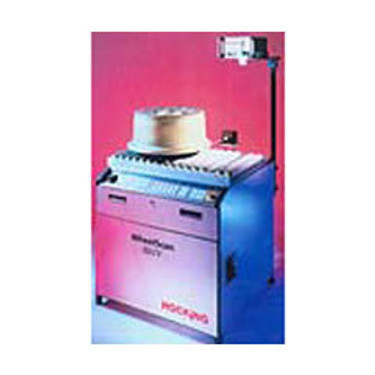 Note: This product has been discontinued, the replacement is:

WheelScan MK IV is designed to meet the need for fast, automated inspection of aircraft wheels.

Traditionally, aircraft wheel inspection has been time consuming and difficult, with the only opportunity to inspect occuring during wheel refurbishment and tyre changes. As an inspector you have to be confident that very small flaws will be reliably detected, as failure to do so could be dangerous.

To maintain high safety standards and detect microscopic flaws in a cost-effective manner, inspections have to be automated and take place at speeds the productivity of your wheelshop demands. Manual inspection does not offer the combination of speed and accuracy needed, only automatic equipment gives reliable detection at high speeds. Hocking eddy current technology enables the detection of cracks on and just below the wheel surface that may be invisible to the naked eye and other non-destructive testing techniques.

The probe sweeps out a helical scan pattern on the wheel surface over the area set by the operator. The test parameters can be varied. The inspection result is printed out alongside a channel showing the lift-off (paint thickness etc..) and calibration records occur before and after the inspection record.

For a high turnaround, with an extensive reduction in preparation before inspection, WheelScan MK IV measures and records lift-off, which allows the probe to inspect even if it is not in direct contact with the metal. This enables painted wheels to be inspected without stripping.

Details of each inspection are recorded by the WheelScan MK IV's integral two channel chart recorder, providing a hard copy of the results and settings for your service records.