The Digit-X is a portable, compact, high quality device for carrying out your X-ray film processor quality assurance programs 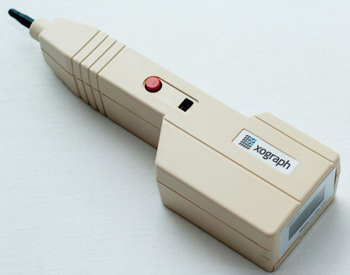 The Digit-X Densitometer is a unique, hand held transmission densitometer, combining ease of use with high accuracy and repeatability. The fine fiber-optic probe allows small areas of film to be measured accurately with readings being displayed on the large clear LCD panel to 2 decimal places. Weighing in at just 6 oz. (175g) makes it easy to carry from place to place. Battery usage is minimal and a low battery warning indicator is provided on the digital display.

Digit-X can reliably read film densities up to a maximum of 4.0D. Simply place your QA film strip on a uniform light source, press the fiber optic tip of Digit-X evenly against the region of the film strip to be measured and push gently forwards. The film density will be shown on the LED display. A conveniently placed zero button resets the display between readings. 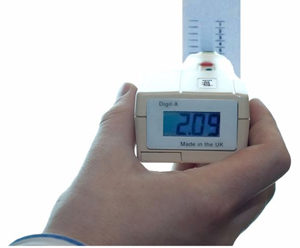 The Digit-X Densitometer comes complete with battery, calibration certificate and user manual and is supplied in a handy, sturdy, portable carrying case, making it ready to use right away.

The Digit-X is available in two different versions to accomodate the changes in technology of viewing boxes being encountered in the field.

The LED version of the Digit-x has been designed specifically to cope with the high brightness levels produced by LED viewers and to accommodate the high frequency of the light output.

NOTE: High brightness fluorescent viewers (85,000 cd/m2 and brighter) would be best suited to use the LED version of the Digit-X.