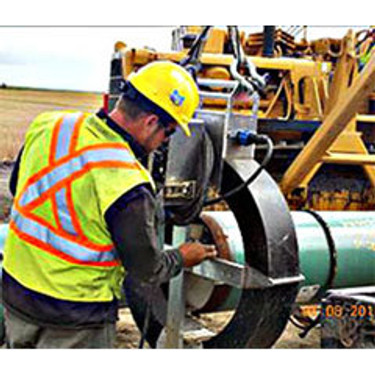 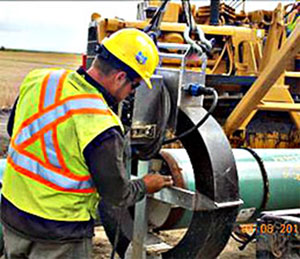 Western's WDV-PD Series Coils are developed for pre-weld demagnetization. If pipes are magnetized, welders will experience Arc Blow, which will lead to weld defects.

The cycle time to Demag, after the Coil is placed on the end of a Pipe, is less than 30 seconds. The Reversing and Reducing DC Demag lasts for over a week, requiring a Demag Crew work ahead of the Welders, not slowing production.

Coil Models from the WDV-14-PD and below weigh less than 60 Pounds (27kg) are intended to be handled manually by the operator. The WDV-16-PD weighs just over 100 Pounds (45kg) and is intended to be positioned with a utility crane. The WDV-60-PD weighs just over 1000 Pounds (455kg), requiring the use of a dual wheel truck with a bumper mount crane. The same truck will require a generator appropriately sized for the Coil. A WDV-8-PD requires 1500 watts, while the WDV-60-PD requires 15 Kilowatts, making a 1 ton truck acceptable. Most modern engine driven Welders as used on a Pipeline Right of Way, have sufficient AC Power for even the largest WDV-PD Coils.

To ensure demagnetization has been achieved, operators need to use a gauss meter to check the pipes' weld bevel. Generally an acceptable level of magnetization for welding (manual or automatic) is a field of ± 3 Gauss.