Meter for measuring residual magnetism in a fast and reliable way 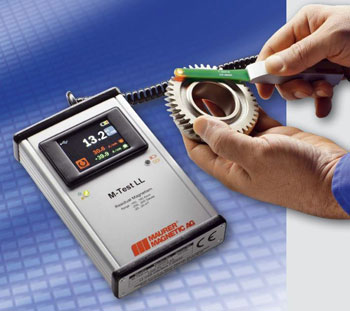 The M-Test LL has been developed specifically for the simple and reproducible measurement of residual magnetism. The M-Test LL is robust and easy to operate and can be used for various applications in the field as well as in the lab. The color touch screen displays the measured values and automatically saves the maximum values which can be reset by the screen. Zero adjustment is done with push buttons. The probe tip contains an LED that indicates the smallest areas with residual magnetism with a response time of 1ms. The probe is connected to the indicating device by a spiral cable which can be plugged in on either side.

*The AC-Field measuring is intended as a rough estimation of the magnetic field, e.g. exposure of people.

The basic configuration has an analog output. With the option of a USB interface, the measured values can be re-evaluated on a PC. The software is included.