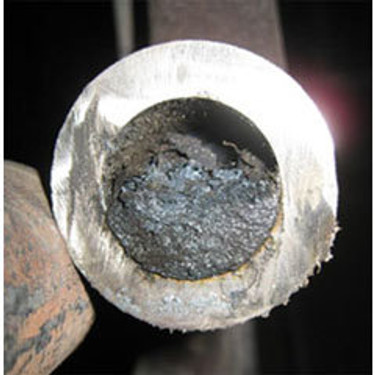 Superheat tubes can get clogged with magnetite, our Low Frequency Electromagnetic Technique (LFET) scanners are a perfect Non Destructive Testing Technique to determine how much could be sitting in your superheat tubes.

New supercritical boilers are designed with austenitic stainless steel boiler tubes in the superheat and reheat sections that operate at temperatures above 1005°F (540°C). At these elevated temperatures, stainless steel boiler tubes will produce magnetite on the inside surface of the tube. A typical arrangement of these tubes is shown in the pictures below. When the boiler is taken off-line and the boiler tubes cool, the internal magnetite scale can exfoliate and accumulate in the lower tube bends. Large amounts of loose scale in the tube bends can block steam flow resulting in overheating and ultimately rupture the tubes. Utilities experiencing exfoliation of new tubes have resorted to cutting the complete population of the affected tubes to remove accumulated magnetite scale as a precaution against tube failure. Development of a reliable nondestructive examination (NDE) technique for identification of magnetite buildup in lower tube bends would benefit utilities experiencing exfoliation in stainless steel boiler tubes. TesTex worked with EPRI to develop a procedure to detect and roughly quantify the amount of magnetite in a stainless steel 347 tube.

A field trial was conducted at Wisconsin Public Service in Rothschild, WI in the spring of 2009. EPRI issued a report detailing the results. Shawn Gowatski gave a presentation at the EPRI BRIG meeting in June 2009. TesTex received a call in Maryland asking if we could perform an inspection to detect magnetite in their 1.75" OD, 0.240" wall, SS-347 superheater tubes. The unit had its second tube failer in 3 days and they needed a method to detect the blockage in the tubes. TesTex has manufactured special LFET scanners to inspect these tube bends for the EPRI trial. These bend scanners were for a 1.5" tube. TesTex ran a quick study in the lab and determined these scanners would work on the 1.75" OD tubes. We only had two of these scanners in stock. TesTex sent one team to the site and the customer put some magnetite in a tube that was removed for us to prove the technique was valid. We also performed a rough calibration onsite by filling a 2" section of the tube full with magnetite and also half filled with magnetite. The responses were linear. The inspection frequency was 1000Hz and low power level was used. The magnetite caused the LFET signal to decrease due to its magnetic properties. It shows up as an additional metal.

The unit contained 171 Assemblies with 12 Loops per Assembly. The customer requested more teams but due to the fact we only had two scanners, TesTex decided to send another team to work nights. A total of 2052 Loops were inspected. Boilermakers were provided by the client to spread the assemblies when necessary. Thirty-eight bends were found to have magnetite inside the tube. The client cut the bends out that contained magnetite. The magnetite was removed from the tube and then the bend was welded back into place.

Calibration shims have been machined from 10% to 80% full of magnetite. Data has been collected for each scanner for dry and wet magnetite. The plant has provided actual magnetite that was removed from their tubes which further improves the accuracy of LFET. This allows the technician to size the amount of magnetite in a tube during the collection process. The plant has purchased eight 1.75" LFET Bend Scanners to keep on-site to make sure the equipment is available when needed.

The plant has a sister unit that also recently had the superheater tubes replaced with the SS-347 material. TesTex inspected this unit when it became available and found over 300 bends containing magnetite. The unit had been running for approximately 7 months with the new tubes. TesTex has performed additional inspections on both units with less than 60 days run time and have found lesser amounts of magnetite. The follow-up inspections have shown about 30 bends that are 10-25% full of magnetite. A procedure has been developed to send 9 technicians to the site to perform the inspection of 4104 bends in less than 12 hours using (4) two-man teams plus an analyst. A report detailed the finding is presented upon completion of the inspection.

TesTex has also performed some spot inspections for a customer in PA who has recently replaced their superheater tubes with SS-347 on two different boilers. The industry news of other utilities experiencing magnetite issues prompted them to perform the inspections. The inspection was focused on the pendants closest to the left and right sides of the boiler. No evidence of magnetite was detected in either boiler.