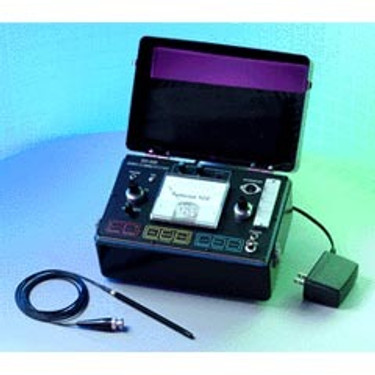 The model ED-520ME eddy current instrument is an electronic device that will locate surface and near-surface discontinuities in non-magnetic materials. It also finds surface defects in magnetic materials, where permeability is relatively constant throughout the test area. In addition, the ED-520 will sort classes of materials according to such properties as hardness, alloy type, carbon content, heat treat condition, tensile strength, and grain structure (where these relate to changes in the magnetic and electrical characteristics of the test part).

With proper standards, electrical conductivity may be evaluated. This often relates to the tensile strength of many aluminum and magnesium alloys. The instrument can also be used to measure the thickness of thin, non-magnetic sheets, as well as conductive and nonconductive coatings (when used with suitable standards).

The ED-520ME is widely used in military and commercial aircraft testing, as well as process control, receiving inspection, research, and maintenance. Its compactness, ease of operation, and consistent precision make the ED-520 valuable for testing in foundries, heat treat shops, and manufacturing plants; wherever accurate data must be obtained quickly to establish fatigue or product reliability. The ED-520 features battery operation for extended field use. It is easily recharged for the AC line, using the supplied AC charger.

The push button controlled ED-520ME instrument utilizes the eddy current principle, whereby induced currents are affected by changes in test part characteristics and homogeneity. Variations in material conductivity, permeability, or physical characteristics cause impedance changes in the test probe or coil attached to the bridge circuit. Such an impedance change causes the bridge to become unbalanced, as indicated by a change on the front panel meter.

Initially, the probe (or coil) is tuned to the specific geometry, conductivity, and permeability of the test system, through adjustment of the lift-off/frequency control. This adjustment for lift-off is especially important in reducing irrelevant meter reading due to surface coatings, roughness, oxides and rocking or wobbling of the probe during testing.

With a full charge, the ED-520ME can operate on batteries continuously for at least 8 hours. Recharging takes 10-14 hours.

The ED-520ME is a portable, self contained electronic instrument offering high sensitivity, versatility and ease of operation. Either manual of automatic adjustment of frequency or balance controls allows the instrument to be set for highest sensitivity on various parts with various probes or coils. The manual controls can also be operated in conjunction with pushbuttons to permit "fine tuning" after automatic setup.